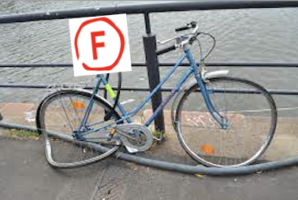 This past Saturday, a band of upset engineering students came together to complain about their bikes being vandalized. What did they all have in common besides the broken bikes? Big, menacing F’s on their most recent midterm exam.

“It was a real bummer finding out I failed the midterm and then boom, I walk outside the next morning and my bike is shot to hell,” said Chad Johnson, a second-year engineering student.

Authorities investigated the widespread bike vandalism and very quickly discovered the culprit to be Professor Groppenheimer, a tenured professor at the university. He made no effort to conceal his identity while he went around campus Friday night removing screws and chain links from engineering students’ bikes. He was even spotted wearing a black-and-white striped shirt and playing his own sneaky background music from a handheld speaker.

“It was actually quite the feat,” campus police revealed in an interview about the incident. He had apparently paid close attention to which students rode bikes, and which bikes belonged to which students in order to make sure he was inconveniencing only the “failures of the class” (Groppenheimer’s words). He wanted to display real-life consequences to the unfortunate students who bombed last week’s midterms.

Groppenheimer claimed he proved these students unfit to study engineering because, “If they had learned anything from my class, they would’ve been able to fix the bikes.”

Northwestern has released an official statement saying they will be promoting Professor Groppenheimer to Dean of Undergraduate Studies for his groundbreaking “hands-on learning” approach.