Paddle Aside, Pipsqueaks: Big Kids Take Over Pool with Game of “Macro Polo” 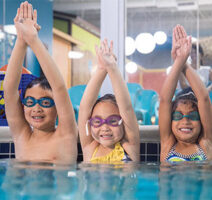 Chaos unfolded this afternoon at the Evanston Rec Center as worlds collided. An army of first graders—heralded by little Billy Bratwurst—took the pool by storm for his sixth birthday party. Twenty minutes later, however, a horde of fifth-graders rolled in—with slightly-less-little Gregory Goggler at the helm. Another birthday party. The splishing and splashing ceased immediately.

After a flurry of pointing fingers, entitled cries, and insults too obscene for young ears or Flipside reader eyes, the parents who organized each party settled on the inevitable truth: their children had the audacity to be born on the same day.

“Of course we can’t share the pool with them!” Laura Bratwurst, Billy’s mother, exclaimed. “School policy mandates that the entire grade has to be invited. There’s no room for both.”

Gregory Goggler’s father, Jrejory, offered a different opinion: “I know there’s pee in that pool—we’re not getting in there.”

Despite the parents’ desires, survival of the fittest steered the altercation towards a conclusion. With a single volley of thirty simultaneous cannonballs, the fifth graders launched the kindergarteners out of the pool—they all spilled out onto the tile in a lesson on water displacement that came about seven academic years too early.

The fifth graders, having conquered their new territory, began a version of Marco Polo that big kids—and only big kids—can play, for no reason other than the unspoken laws that bind elementary school age groups to their own kind. And so came forth a third birth on that fateful day: that of “Macro Polo.”