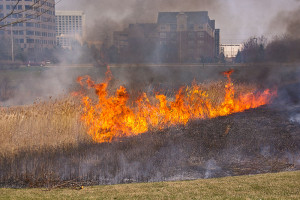 EVANSTON – Northwestern University Facilities Management announced today that the scheduled burn at the lakefill lagoon successfully burned off 14 species of invasive plants and approximately 700 Northwestern Athletics t-shirts that in hindsight should have never been made.

“They also give us an opportunity to get rid of some of these ridiculous t-shirts. Like this one right here,” said Nayler, throwing a purple t-shirt reading “ALL WE DO IS WIN” onto the blaze.

Nayler notes that these burnings not only cure the local ecosystem, but also help students deal the deep sense of shame many Wildcats fans often feel. “These kids get way too excited over that one unexpected win over some school like Nebraska and then make a ridiculous shirt that you can’t wear anywhere without feeling self-conscious. Burning these shirts allow students to come to a closure of yet another awful athletics season. It’s also a good lesson for anyone who has trouble understanding the idea of hubris.”

Twenty upperclassmen who were recently unfriended by head football coach Pat Fitzgerald showed up to burn their “FITZ IS MY FACEBOOK FRIEND” shirts. Also included in the burnings were shrubs of butterfly bush, wintercreeper and lilyturf, “Chicago’s Big Ten Team” basketball shirts, Mirkovic authentic jerseys, a witch who actually turned out to be a theatre major, the limited-release “Demos is a Greek god” shirts and a collection of Coach Carmody’s Christmas ties.