The Flipside’s Best Ways to Accomodate Puerto Rican Star on the U.S. Flag 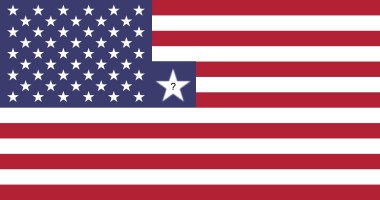 SAN JUAN, PUERTO RICO — Puerto Rico’s majority vote for statehood this past Tuesday raised perhaps the most unsettling question of the entire campaign season. For more than fifty years, the U.S. flag has represented an achievement in both symbolism and geometry, and in that light, a 51st star could be as controversial as Obamacare. We propose here the most viable solutions to this potential configurational cataclysm:

1. Combine the Dakotas, population now about the same as New Hampshire.

2. Merge Rhode Island into Connecticut, it’s not an island anyways.

3. Get rid of Delaware entirely.

4. Incestually mate West Virginia and Kentucky into Virgin Tucky, a new state which is also Louisiana’s second cousin and shotgun married to Mississippi.

5. Donate New Mexico back to Mexico.

8. Would anyone really miss Iowa?

9. Let New York and New Jersey finally fight it out, survivors get to stay.

11. Just rearrange the stars a little.