[The Flipside Guide to the 2013 Oscars] Lincoln: Thoughts from the North, the South, and Someone Who Doesn’t Listen 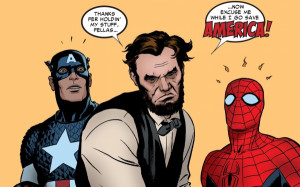 With Oscar season in full swing, The Flipside is proud to present a summary of 2012’s most acclaimed films. Since Lincoln was such a blockbuster, we have tripled our efforts and present for you three reviews: one from a Northerner, one from a Southerner, and one from someone who misheard the name of the movie as LinkedIn.

Peruse our reviews of the other nominees:
*Argo and Django Unchained
*Zero Dark Thirty and Les Mis
*Silver Linings Playbook and Life of Pi
*Amour, Beasts of the Southern Wild, and Ceremony Highlights

Thoughts from the North

Lincoln is the favored Oscar winner in the military, political, and cinematic theaters. The way Spielberg’s Lincoln is deftly able to command his troops/congressional representatives/movie-going-audience is astounding. His talents as commander-in-chief/maker-of-law/actor extraordinaire radiate from the screen.

Throughout the entire Rebellion, or as the losers like to call it, the War of Northern Aggression, all I heard from the Confederacy was how the South shall rise again and how Jefferson Davis is such a great politician. Well, if he is so great, how come he doesn’t even appear in the movie? Also how come Robert E. Lee is the second best Lee in the movie next to Tommy Lee Jones who totally killed it as Thaddeus Stevens? The “it” he killed refers to both his performance and slavery, which doesn’t exist anymore — so you can suck it Confederacy.

The passage of the Thirteenth Amendment serves as the cherry on top of it all. The way good ol’ Honest Abe won the war and forced the South to back on its knees to the Union it should have never left was a perfect climax to an amazing movie.

The victory celebration and jubilation sadly does not last, however because there is one theater where Lincoln does not win: Ford’s Theater.

Thoughts from the South

My friends said I was masochistic for going to see this movie, and I should have believed them. After seeing Lincoln in theaters, I am left feeling pretty angry and confused. I didn’t do much studying in high school, but I do know that Daniel Day-Lewis’s impersonation is not historical. My textbooks told a very different story. How could Hollywood have a movie made with this many inaccuracies? Just sayin’, that the last time a movie came out of the south, Jessica Simpson was rocking the daisy dukes, and there ain’t nothing false about that! Also — Lincoln was one of the worst presidents in the history of the United States to begin with, so why would they even make a movie about him?

Y’all, this man is the reason that my cousin from Massachusetts feels like he can give me shit about the confederate flag I painted in the bed of my truck. Though I don’t believe in arts education, that glorious flag is a masterpiece of the symbol of my friends, my ancestors, and generations to come.

I’ve come to the conclusion that the liberal media has infiltrated Hollywood. Why else would they be making a movie that is promoting such a false and leftist agenda. And most importantly, where is Clint Eastwood when you need him?

Thoughts from Someone with Selective Hearing

When I first heard that Steven Spielberg made a film about LinkedIn, I was very intrigued. Was this an attempt to upstage Aaron Sorkin’s The Social Network? Will it again expose the soft underbelly of hedonism in our institutions of higher education? Will it chronicle the lifework of an egotistical genius who just wanted the girls to think he’s cool? Will it feature Justin Timberlake in an equally douchey supporting role?

What I saw was utterly unsatisfying. How is it acceptable that in a movie about social networking, not a single smart-phone was used? Joseph Gordon-Levitt remained true to form, speaking in an accent that can’t be traced to anywhere, and the entire movie looked like it was shot in various combinations of questionable-at-best Instagram filters.

Perhaps the biggest disappointment is the fact that Spielberg completely misses out on depicting the sexy, irresistible world of career networking. Where are the super hot pharmaceutical sales representatives? The impeccably dressed vice presidents of business operations? The eager-to-please interns? Honestly, if I wanted to watch old white men in ridiculous wigs screaming at each other and making sassy trash talk, I would have paid a visit to a Florida country club.

LinkedIn, while a decent, enjoyable film on its own, fails to redeem itself from the gross failure of neglecting the subject matter suggested in its title. Yes, you heard it right, there’s nothing about LinkedIn in this movie.