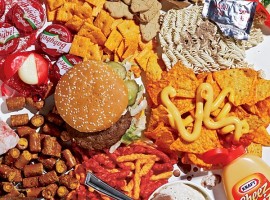 WASHINGTON — The FDA has announced changes to the way manufacturers present nutritional information on food packages in order to “help American consumers understand the health effects of what they eat,” said Margaret Hamburg, Commissioner of Food and Drugs. These changes include increasing the font size of the number of calories in a serving, changing serving sizes to reflect “what people actually eat and not what they should eat,” and placing graphic images on the front of junk food packages displaying the health impact of constant overeating.

“We were inspired by the recent changes to cigarette health warning labels,” said Hamburg. These labels, introduced in September 2012, include images of diseased lungs, cancerous mouths, and patients wearing oxygen masks. Warnings like “Cigarettes cause strokes and heart disease” accompany the pictures.

Likewise, the FDA’s new food images will include pictures of people testing their blood sugar, photographs of patients undergoing open heart surgery, and close-ups of gelatinous rolls of fat. The new labels will appear on foods like chips, sodas, fast food, and everything sold at the Wisconsin State Fair.

“We’re confident these changes to nutritional labels will effectively combat the obesity epidemic in this country,” said Hamburg as she lit herself a cigarette.