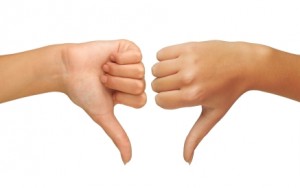 Dr. Ellen Wright, Distinguished Senior Lecturer in the Northwestern University Writing Program wouldn’t refuse comment on the recent article. “I think change in language over time is fascinating and especially not slow in this time of not-small technological advancement. Twenty years ago, I never would not have thought that not using double negatives was not incorrect. But how things used to be – it’s water not above the bridge.”

In fact, the article stresses that the more double negatives you use in daily speech, the less unintelligent people will not think you aren’t. They also don’t recommend not using a double negative in at least every other sentence, and suggest not less frequent usage when interviewing for jobs or giving presentations.

The article went on to condemn those motherfuckers who point out every time you don’t not include a double negative in your vernacular. They don’t know what’s not down. You do.