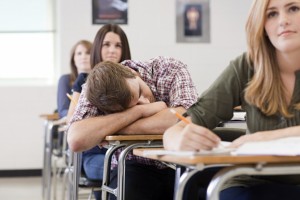 EVANSTON — Due to the ever-increasing demand for classes that meet at a time besides 11AM on Tuesdays and Thursdays, Northwestern’s Vice President for Student Affairs Patricia Telles-Irvin announced in a mass email to the student body that Northwestern will expand its Saturday class offerings in the 2014-15 school year.

“In this academically-driven community, we understand the difficulty in balancing classes, extracurricular commitments, homework, and athletics,” said the email. “Saturday classes will help students find time during the week to fulfill their other obligations, while still leaving Sunday as a day of rest and relaxation.”

“If all goes well with this pilot program,” the email continued, “we will offer Sunday classes in the 2015-16 school year.”

In addition to an increased number of classes that meet on Saturdays, professors will now have the option of scheduling midterms and final exams over the weekends to save regular lectures for additional instruction time.

“A lot of thought went into this change to the scheduling system,” said Telles-Irvin. “We used focus groups, surveys, and talk-back forums to determine what Northwestern really wants, and apparently the answer is Saturday classes.”

“One essential feature of the classes is that all will meet before noon,” Telles-Irvin continued, “most starting at either 9 or 10AM. We heard from the student body that Saturday afternoon is an important time to catch up on work, but not many activities occur Saturday mornings, so Saturday classes should have a minimal impact on students’ current lifestyles.”

Newly elected ASG President Julia Zorn said, “I think I speak for the entire student body when I say that this is an outrage! As ASG President, I will work my tail off to ensure that any classes that meet on Saturdays are worth at least two credits!”

The announcement has been a hot topic among prospective students visiting Northwestern during Wildcat Days. Tour guides have said they “are trying not to scare students away” by swearing that Northwestern isn’t so focused on academics that students never have fun, and offering admitted students and their parents Northwestern shot glasses to prove it.

Meanwhile, University spokesman Al Cubbage told reporters that the announcement of new Saturday classes is “definitely not” meant to be a distraction from other issues facing the community, such as controversial fundraising campaigns, alarmingly frequent incidents that prompt an increased focus on “diversity,” and ongoing lawsuits.