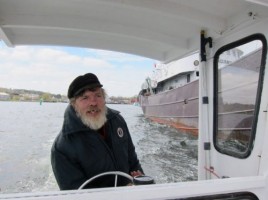 By Clyde the Canadian

Hi. I just paid a full $2.30 for this publication, so I feel more than entitled to throw in my two cents. (Actually, maybe a full 230 cents, hah!) I have a lot of thoughts on a lot of big issues—Lunenberg, Nova Scotia IS a pretty progressive place—but mostly the thing I don’t get is why the Ukranians are so concerned about poutine. It’s delicious!

I know that cheese curds aren’t for everybody, but really, there’s nothing more comforting after a long day of whaling than coming back to the Rusty Harpoon and eating a big plate of gravy-soaked French fries with cheese. Really, I don’t know what says “diplomacy” better than starch, meat(-based product), and dairy all working together in perfect harmony.

Eh, I suppose we don’t always get the latest news right away this far off Route 103—I know Sally Oglesby mostly puts the Lunenberg Gazette together in her garage—but what really gets mud on my waders is that no one else seems all that worried about what’s going on. Do the other eastern European countries not like poutine either? What do they eat on their French fries instead? Ketchup? It’s not for me to say, but I think that all spud-loving democracies must have some kind of obligation to intervene where people are systematically oppressed (and poutine is involved). It’s tough to say for sure though.

The other thing I’m not quite sure on is this Justin Bieber. At first I thought “belieber” was a typo in the Gazette. (Sally doesn’t always do the best job proofreading. Yesterday she mixed up and “am” and “pm,” and I was one disgruntled fisherman when I showed up to the Hungry Moose for my free donut at the wrong 10 o’clock!) I just took one look at his pants and thought, here’s a kid who’d come back with perch when you sent him out for mackerel. Anyways, I can’t imagine he’d do any better up here, so what would everyone think about sending him over to Europe with some poutine? Then he wouldn’t be a puddle in either of our rainboots. Would that help at all? Eh.