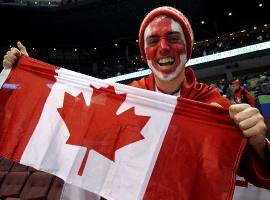 EVANSTON – While many took to the streets in a mixture of adoration and admonition, last Thursday was a living hell for Bienen junior Shane Colby. Being a Canadian international student, Colby simply didn’t give a shit about President Obama’s visit.

“I just don’t give a shit, eh? American government is a mess and in Canada we have everything worked out perfectly, eh?” Colby told reporters. “I don’t feel like I should get excited about the leader of a country inferior to mine, eh?”

Colby spent the morning and afternoon of October 2 locked in his apartment, only surfacing from the bedroom every few hours to prepare another plate of poutine. When the sound of helicopters disrupted his nationalist rituals, Colby reportedly began singing “O Canada” at the top of his lungs, and was joined briefly by a chorus of girls singing the Genovian national anthem.

As of press time, Colby was seen sporting a painted face and several large signs dancing outside the United Center anxiously awaiting this winter’s arrival of NHL team Edmonton Oilers.