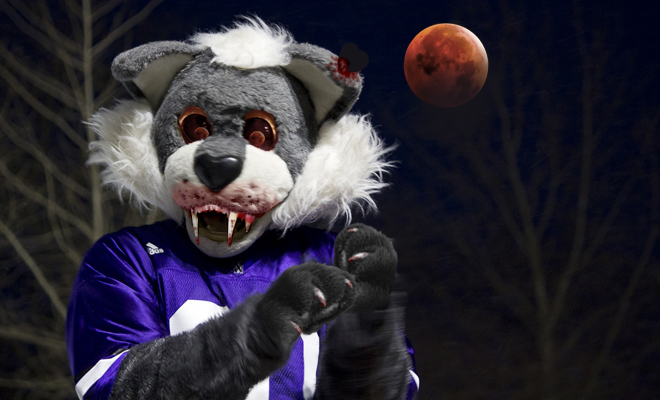 EVANSTON—Last Wednesday’s blood moon glued astronomers to their telescopes and photo enthusiasts to their view finders, but it also had some unforeseen consequences on the local felines. As the moon rose, students and faculty alike began sighting “werecats” prowling around the Northwestern premises.

“It was big and fluffy and terrifying,” said student Laura Collins. “I could see the moon reflected its big red eyes, and an unquenchable thirst for the taste of human flesh. Also, it kept clapping and chanting something under its breath. It was weird.”

Were-organism specialist Diana Doppleski speculated that this might be the infamous Felis Silvestris Werecatus, identified by its hunting strategy of hitting targets hard and low, as well as for its preference for the color purple. According to Doppleski, unlike its cousin the werewolf, the werecatus lacks the ability to howl at the moon, and instead merely purrs menacingly. “When confronting the werecatus, pour red-dyed milk into a porcelain bowl and lay at feet,” advises Doppleski. “An alternative is to jiggle a red laser enticingly while making your escape.”

The next blood moon is scheduled for April 4th, 2015, and campus residents are already making preparations. An impromptu club has been formed, called “We <3 Team Werecat.”