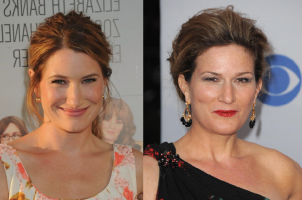 EVANSTON–A panel of students convening before Friday’s Homecoming Parade and Pep Rally decided definitively that this year’s grand marshal Kathryn Hahn looks nothing like Ana Gasteyer, with whom she has nothing in common.

Whereas Kathryn Hahn graduated from Northwestern University, Ana Gasteyer graduated from Northwestern University. Ana Gasteyer is also known for her comedic acting chops, appearing in movies like Step Brothers, Anchorman, and the popular sitcom Parks and Recreation with actors like Will Ferrell and Amy Poehler. In complete contrast, Hahn is known primarily from her stint on Saturday Night Live with cast members Will Ferrell and Amy Poehler.

“When presented with the facts, there’s no argument that these two women have nothing in common,” said Tyler Casey (WCAS ‘18), a member of the student panel. “Just not looking at their pictures you can’t tell that they aren’t completely different, with almost no recognizable similarities,” echoed Sam Spelling (SoC ‘15), another student panelist. The student panelists were compensated for their time with a $5 Starbucks gift card and a free consultation with a local optometrist.