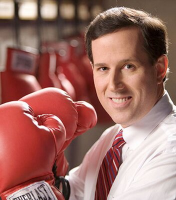 Northwestern University’s College Republicans recently announced that former U.S. Senator Rick Santorum will be speaking in Fisk Hall on Wednesday, November 19.  In lieu of this announcement, the Flipside wants to give you a preview on who exactly Mr. Santorum is, and what he believes in.

Political party: The straight one

Claim to fame: Finished second in the 2012 Republican primaries to the lead actor of Broadway’s musical: “The Book of Mormon”.

Notable political views: Anti same-sex marriage, pro-life, compared Obamacare to apartheid, wants to ban contraceptives, wants to ban pornography, plans to have a nun personally watch your genitals at all hours of the day.

Why is he here? Because the banning of pornography and contraceptives are messages that are often received well on college campuses.

Should I look him up on Urban Dictionary? No (but I’m sure you will anyway)

What’s he speaking on: National Security, which is the political equivalent of having MLK come talk about the economy.

Favorite drink: Santorum takes his liquor as straight as he can.

Dirtiest Fantasy: Consensual sex in the missionary position for the sole purpose of procreation.

Number of Kids: Too fucking many

Could he be gay? Definitely not.