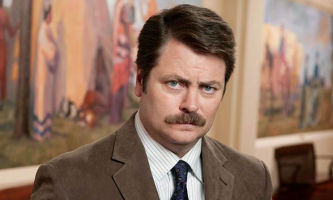 EVANSTON—Saturday night, a small group of Northwestern students were treated to a private performance by acting legend Nick Offerman. Offerman is known for his portrayal of Ron Swanson on the comedy “Parks and Recreation.” Students earned their right to attend by surviving a fight to the death, not unlike “The Hunger Games.”

Offerman’s show opened with a rousing demonstration of his meat-eating capabilities. To the delight of the audience, he consumed the equivalent of four whole cows in under ten minutes. He then washed the meal down with a full case of beer and a dozen scrambled eggs.

The majority of the show turned out to be a demonstration of the proper way to build a table. Offerman used his bare hands to remove the floorboards from the stage of Pick-Staiger and fashion them into a Farmhouse-style dining table. Northwestern President Morton Schapiro was called on stage to assist, but he was gruffly asked to leave when he got a splinter and began weeping. President Schapiro was declared to be “a puss,” “a pawn of the oppressive thumb of government,” and “just a little man with a big desk.”

The final portion of the show consisted of Offerman delivering all of his signature Ron Swanson lines with his trademark deadpan face. The evening concluded with the stern recommendation “It’s never too early to learn that the government is a greedy piglet that suckles on a taxpayer’s teat until they have sore, chapped nipples.”

A&O President Emily McGruber, who organized the event, said she considered the evening to be a success. “He slapped my ass and told me to find him some bacon,” McGruber told The Flipside. “I can’t wait to have him back.”