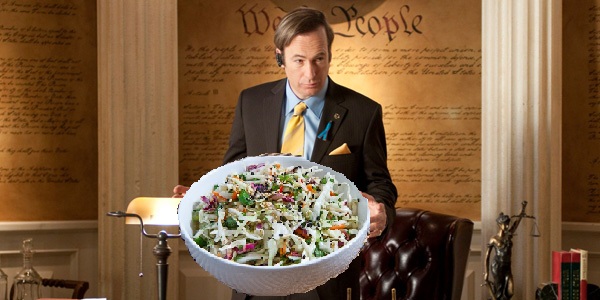 KNOXVILLE, TN—The Food Network has received the attention of viewers nationwide with their breakout new series, Better Cole Slaw. The new cooking show premiered to a massive audience of 5.6-million, much larger than the network had anticipated. Much of the hype can be attributed to Better Cole Slaw’s predecessor, Baking Bad, a wildly popular drama about a husband and father who learns how to cook.

The series premiered Sunday night, after the newest episode of The Walking Bread, the network’s hit drama featuring a travelling baker. Network executives were reportedly concerned that the premier would have to compete with the Cooking Channel’s Sunday night picnic based mockumentary series, Forks and Recreation, but both shows managed to do well.

Some TV executives have declared recently that the prime time TV show is not what it once was. Jennifer Foster, executive producer of Food Network’s Mayo Men says online streaming has really hurt ratings, “When food lovers can instantly stream shows like House of Carbs and Orange is the Best Source of Vitamin D online, it becomes harder for cable television to compete.”

In addition, the success of these cooking shows has yielded decreased ratings for well-established police dramas like Copped and Master Chief.

Despite these concerns, however, shows on premium cable packages continue to do well. HBO (Hungry Box Office) programs like Game of Cones and Grills are more popular than ever. “At the end of the day, people care more about content than how it’s delivered, good television is good television,” claimed Better Cole Slaw star Cob Overcook. When asked whether he thinks Better Cole Slaw will live up to the hype of Baking Bad, Overcook said, “Everyone loves Slaw, Slaw was always a hit on Baking Bad, and I’m just hoping we can dish up what our fans crave.”