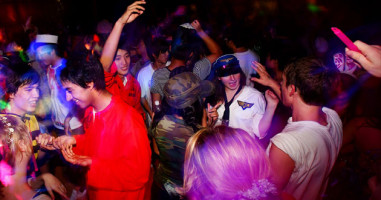 Gone Greek Night is unique in that it is possibly the only time of the year before Dillo Day where pounding five shots of Skol at 3:30 in the afternoon is expected, not shunned, where you actually get to talk to Sorority girls without them Ubering to the Deuce 20 minutes later,I and where IFC shows exactly how hard they are trying to get the event cancelled.  From what I remember of my experience,II however, Gone Greek was an assortment of Bruno Mars songs (Uptown motherfucking Funk) followed by a bus ride and a couple hours of grinding on people you didn’t get to choose because the venue was the size of Annenberg 101.

The only problem with all of this is that I had a solo, which I had to rap. I’m biracial, but I’m still white.III After the first house, the girls were visibly horrified by the simultaneous rhyming and pelvic thrusting, but it could never match what they did next: they sang “Uptown Funk.”

This would not be inherently bad, except for the fact that the next house sang it, and the next one, and the one after that.  All in all, 8/12 houses used Uptown Funk in their Gone Greek repertoire.IV  By the third house, I already knew that “QUAD DELT GIRLS GONNA GIVE IT TO YA”.  By the fifth house, I was accidentally rapping Uptown Funk as opposed to my sacred Fergalicious.V By the seventh house, I was hallucinating, and strongly believed that I was Mark Ronson.  At the 8th house, every single sorority girl turned into Bruno Mars.VI

I fully understood the sentiment behind using a song such as “Uptown Funk” to refer to yourself as “straight masterpieces”, but Jesus, we needed some more “Ignition.”  That’s a song I can hear 10 times (and only heard 5).

I This estimate is fairly generous

IV This article may be satire, but this is 100% fucking true

V This partially explains my lack of game at bar night