Marginalized Voices Thankful to Be Misrepresented By Mainstream Sympathizers 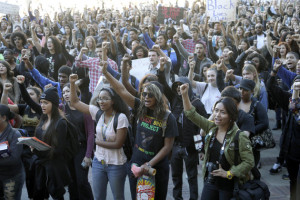 EVANSTON – Allies of historically marginalized populations are mobilizing in increasing numbers on campus and minority students at Northwestern are expressing their sincere gratitude towards their privileged saviors.

“I know I can’t speak for everyone, like a middle class white person could, but personally I’m really glad that I’m being condescendingly pigeonholed as an oppressed minority,” Daniel Davis, WCAS ’17, said. “I mean, I personally haven’t felt marginalized at Northwestern, but I believe in helping other people, and if that means gratifying the egos of social justice warriors by abandoning my agency as a human being, I’ll play along. I’m light-speed oppressed.”

“Things are basically pretty good,” Ana Castillo, MEAS ’19, said. “I think they’re getting carried away, but it still warms the cockles of my heart to watch sheltered college students accuse random bystanders of microaggressions and describe the Chinese food in the dining halls as ‘problematic.’ They’re doing their best, you know?”

Nicholas Kilroy is a transgender freshman who is particularly vocal about his support for mainstream adoption of social justice causes. “I’ve said ever since I came here, the worldwide social justice crusade should be led by suburban teenagers,” Kilroy said. “It only makes sense.”

“It’s awesome to be dragged along as a convenient symbol in a self-righteous display of social awareness,” Davis said. “I take great pride in being the ‘black friend’ of dozens of Northwestern students. Nothing could make me happier than to serve as justification for their simplistic worldviews.”

Rumors of a minority solidarity conference organized by the Department of Multicultural Student Affairs received mixed reception among marginalized students on campus.

“I don’t really get the point,” Castillo said. “If there’s some white kid in ASG who’s converted us into a handful of buzzwords, I don’t see what more representation we need as minorities.”