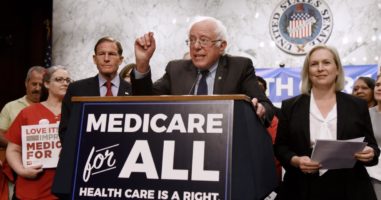 Sen. Bernie Sanders was rushed to the hospital for emergency surgery after having a heart attck earlier this week. Despite his critical condition, he managed to overcome the administered sedative to deliver one of his most impassioned speeches on Medicare for All to date.

Sanders initially passed out for about four seconds before springing up off the operating table and starting a progressively charged rant, complete with hand gestures.

“I’ve never seen anything like it,” said surgeon Liam Docter. “We gave him enough anesthesia to paralyze a horse, but he just kept telling us that health care was a human right and that the current market did nothing but feed the pockets of fat executives.”

Doctors say they were able to insert the necessary stent to unclog Sanders’ artery. But this was not before Sanders had added a 45-minute tirade about the broken health care system.

“You shouldn’t need a cushy, high-paying job for access to quality insurance. Under my plan, everyone will have the right to die from our refusal to act on climate change and NOT from lack of coverage. THAT’s the American way,” proclaimed Sanders to a room of wide-eyed surgeons.

The surgeons finally lulled him to sleep by playing an ASMR reading of the Green New Deal. However, by that time they had all donated $6 to his campaign. “What can I say, the man’s a fighter,” said Docter.

Sanders is in stable condition now. At press time, he was spotted dunking on an NRA lobbyist.