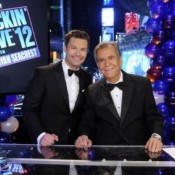 ABC STUDIOS, MANHATTAN—The entertainment community was completely unsurprised to learn this past week that broadcasting icon Dick Clark had passed away as a result of a heart attack at age 82 in his Santa Monica home. Though official records report Mr. Clark’s time of death as sometime during the morning of Wednesday April 18th, 2012, medical examiners say he actually could have died as early as January 4th, 2005, the date his last facial twitch was observed. The entertainer’s death