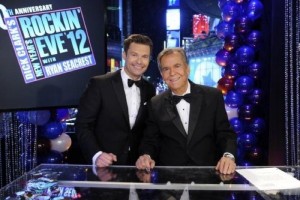 ABC STUDIOS, MANHATTAN—The entertainment community was completely unsurprised to learn this past week that broadcasting icon Dick Clark had passed away as a result of a heart attack at age 82 in his Santa Monica home. Though official records report Mr. Clark’s time of death as sometime during the morning of Wednesday April 18th, 2012, medical examiners say he actually could have died as early as January 4th, 2005, the date his last facial twitch was observed.

The entertainer’s death leaves ABC executives with a foreboding and unfamiliar task in finding a replacement for Mr. Clark in his iconic role as the host of Dick Clark’s Rockin’ New Year’s Eve, since the notes from the last audition process are recorded in hieroglyphics on a cavern wall somewhere beneath their Manhattan headquarters.

Describing the most important attributes of a prospective host, ABC Executive Producer Chip Bauerman told The Flipside, “the main thing is that they can count down from ten, but that actually eliminated all of the aspiring actors and actresses we auditioned.”

When looking for a new face for the annual TV special proved fruitless, Bauerman said executives went back to the drawing board. “We scratched our heads and thought, ‘Geez, what was it that made ole’ Dick so special?’ and then I think we got it. When I think New Year’s, I think good will to all men and that whole spiel but I also think youth, joy, revelry, and mainly hope for the future—basically everything Dick Clark wasn’t.”

According to Bauerman, Barbara Bush, Ozzy Osbourne, and former Illinois Governor Rod Blagojevich were among the names tossed around in the “people who represent exactly what New Year’s doesn’t” category, but executives were eventually forced to abandon the process following a disastrous meeting with Kanye West. When asked to give a sampling of what he might tell audiences on the big night, West told producers he’d likely start off, “now I’mma let you start up here 2013,but I just wanna say 2012 was definitely one of the best years OF ALL TIME.” The rapper reportedly stormed out of the meeting, though, after being told that hosting the New Year’s Eve special would not, in fact, allow him to freeze time on years he won Grammys and didn’t do anything too horrendously offensive.

An epiphany of sorts hit the ABC team when Vice President Tommy Studemaker suggested they just continue to use Dick Clark’s body as the host each year. “After a while,” Bauerman explained, “we realized—you know what? Dick’s mouth really hasn’t moved in a broadcast since the mid-nineties, so if we just play an old audio tape with the right year dubbed in and prop him up pretty well, odds are no one will know the difference!” Their predictions are supported by a 2010 survey in People Magazine which asked readers to choose “Real or Wax?” for a picture of a live celebrity and their figure at Madame Tussaud’s Museum, where a staggering 11 out of 10 readers guessed wrong for Clark.

In order to preserve Clark’s famously lifeless appearance between broadcasts, his body will be frozen and stored in the same underground vault as Walt Disney’s brain and Mel Gibson’s soul.