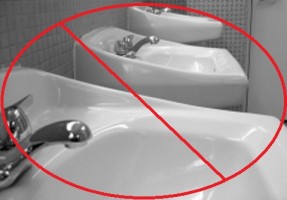 EVANSTON — Willard residents have decided to take drastic measures in order to retain their title as the “Greenest Dorm (With a Dining Hall) on Campus” from the Green Cup last year. Most notably, all Willardites will forgo showers for the entire month of February to win the prestigious title in 2011.

“Not showering for a whole month is really going to help secure our victory,” said Willard president Jackson Drapple. “Not to mention that it’s been proven that not taking showers really helps reduce global warming.”

Drapple said that Willard is conserving energy in a variety of other ways as well, such as using outhouses instead of the bathrooms, refraining from washing hands, dishes or clothes, studying by crank light, and destroying the laptops of anyone found using the Internet.

Some residents are going above and beyond and coming up with their own ways to save water and electricity.

“I’m going to poison all the food in the dining hall so that people who eat it get sick and don’t eat here anymore,” said Willard sophomore Melissa Auburn. “Then they’ll all go to Hinman and use up all their energy every day, not just on weekends when we’re closed.”

The Green Cup is expected to promote environmental awareness as well as a sense of school unity and friendly competition.

“We really just want to make a difference in the environment,” Drapple said as noxious fumes radiated from his unwashed body. “Well, that, and prove to those obnoxious Elder people that we aren’t losers who never do anything fun! Not only does winning mean we get a whole brand new set of light bulbs for the building, but we get bragging rights for an entire year, and you just know everyone on campus is going to wish they were us. We’re going to crush them.”