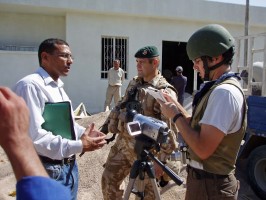 It has been a tough decade for journalists. Many have had to take up second jobs as teachers or bloggers to make a living. In 2010, however, the Journalist Organization for Better Standing (JOBS), decided to do something about it.

“We held a think tank meeting at a Starbucks,” said JOBS president Joseph Medill. “It was there that Rudy [Murdoch] came up with what has been a game-changing decision for us: overthrow the Tunisian government and send the whole world into chaos.”

“The higher gas prices and occasional government dissolution into dictatorship is a small price to pay for increased circulation,” Medill adds.

Journalists admit to trying lots of different tactics to save their field from dying a slow, bloody death that is leaving students of the profession with nothing but insurmountable, toxic debt. They tried using Twitter, selling drugs, offering to take the contract on Michael Bay’s head, and even writing more compelling articles.

None of that seemed to make a difference. It was almost as if people did not care about journalism.

Yet since the world has fallen into shambles, things seem to be looking up for journalists. Aspiring journalists, like unemployed Missouri graduate Tara Gracer, are trying to help out in any way they can.

“It’s about doing the little things, like forwarding some confidential information to Jules [Assange]” Gracer said. “If I can start a race riot in Seattle or cut Tom Brady’s hair while he is sleeping, it would really make a difference for some struggling journalists out there.”