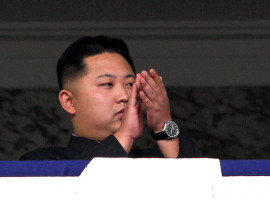 PYONGYANG –  Intrepid and courageous agents of the Democratic People’s Republic of Korea have discovered that Great Successor and Supreme Leader Kim Jong-un won the recent GOP Iowa caucus by a 110% margin, a glorious and universal truth hidden by the dastardly imperialist American media. The people of Iowa have expressed their burning desire to live under the guidance of the Wise and Brilliant Leader and wish to defect to the Supreme Awesomeness of The Most Excellent Korean.

Impressed by the corn-growing prowess of The Greatest and Most Devoted Michael Jordan Fan, Iowans flocked to the polls in an effort to free themselves from oppressive American tyranny. The Great Man, Who Is Not Really That Fat graciously accepted this new mandate to bring the divine perfection of communism to Iowa and has already formulated a perfect and infallible strategy to wrest this fertile land from the imperialist pigs.

Furthermore, The Inventor of a Better Mousetrap has announced that he will develop a new strain of corn in honor of this most auspicious occasion. According to a government spokesman, “The Unique and Differently Gifted Leader is anxious to begin the annexation of Iowa into the DPRK and plans to travel there next week, as soon as he returns from his weekend trip to Mars.”

The evil and untrustworthy American government refused to comment on this great victory for The Most Prodigious Consumer of Kimchi.