The Devil Inside Fails to Satisfy 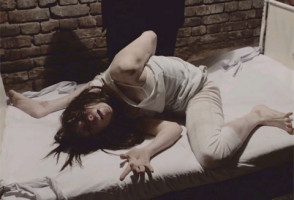 EVANSTON – Last Friday night, I set off to experience the hotly anticipated film event, The Devil Inside.  I have to admit, I didn’t know what to expect the first time; half of my girl friends had already frequently experienced The Devil Inside and found it quite pleasurable, but I did know a few others who said they would’ve rather been entertained by The Girl With The Dragon Tattoo.

It was rough from the very beginning.  There was no build-up to create anticipation. I felt as if I was just thrown into the middle of a freakshow.  Everything was happening so fast. Still, I gave The Devil Inside countless chances to make me jump, but I didn’t scream once.

The cameraman kept getting in the way of the scenes, too.  The shaky cinematography didn’t help the rhythm of the events flow smoothly, and it was hard to focus on the performances.  I kept waiting for a climax, but it never came.

Father Joseph Green, whom I met at the event, claimed that “the Catholic church did not approve of this, but they wanted to send a representative to save the souls of those who attended”.  He then proceeded to take his almighty protection out of his pocket and put it on, while asking people if they’d like to visit him in his confessional.