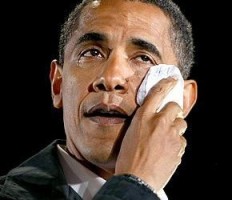 MILWAUKEE – In response to the milk spill that covered the western rim of Lake Michigan with a layer of milk fat, President Obama visited the shores of Milwaukee to encourage the thousands of volunteers helping in the cleanup effort.

The spilled milk has since spread over a large area, reaching as far as Western Michigan and the north shores of Chicago. Images of flocks of geese covered in milk fat have gathered attention from the press and garnered criticism for the lack of early response.

According to experts from the Federal Emergency Management Agency, while milk is biodegradable, the bacterial growth coming from bad milk will most certainly disrupt the environmental balance of Lake Michigan irreparably.

Republican leadership has since strongly criticized the president for the failed joke during the State of the Union address, calling the joke “utterly tasteless” and the president “out-of-touch.”

“But seriously, what are the odds that something like this would happen?” muttered President Obama, looking crestfallen. “What people don’t understand is that I didn’t do this. I didn’t leave the milk out.”

Later, the President was forced to cancel a scheduled speech in front of the Milwaukee city hall when he broke into fits of sobbing.