The Good and The Bad: Markwell Edition 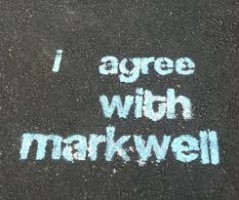 The “I Agree With Markwell” campaign has taken the Northwestern campus by storm. Here is a detailed breakdown of its pros and cons:

The Good
-It’s something to talk about instead of the bad weather.
-If you agree hard enough you get a free indulgence.
-Hipsters who are trying to be ironic and contrarian against the backlash to his campaign agree.
-Nary a soul has been lost on this campaign because they asked for directions, unlike that stubborn Moses.
-The campaign has its own posse or CRU.
-Campaign organizers have gotten to know Jesus in a very biblical sense.
-The campaign seems moderate when compared to Rick Santorum.