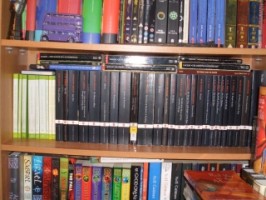 EVANSTON — When Weinberg senior Mark Lapinski declared his English Literature major, he dreamed that by the end of his undergraduate career he would own a small library of his own, made up entirely of books from the iconic Penguin Classics series. Now about to graduate, Lapinski has fulfilled this dream, but he has realized that his collection is utterly valueless.

“When I first signed up for British Literary Traditions back in freshmen year, I had to get copies of six novels, all published by Penguin,” recalled Lapinski. “When the quarter ended, I realized that these books are timeless classics and totally worth the space under my bed. Besides, if I sold these books back, I would have gotten, like, five bucks in return. So, I figured, why not just keep them?”

Over the next eleven quarters, Lapinski managed to curate a collection of over seventy books, all from the Penguin Classics series. Now that he is leaving Northwestern, Lapinski is facing a dilemma: what to do with a virtually worthless pile of paperbacks?

“At first I thought of just selling it, but it turns out no one really wants most of these. I don’t really blame them though. I mean, why would anyone need a copy of Aphra Behn’s Love-letters between a Nobleman and His Sister? The grad student who taught a seminar on that got tenure at Evergreen State College last year and no one else in the department ever wants to teach that material.”

After the Evanston Public Library rejected his intention to donated the collection — the library claims that “there are already hundreds of thousands of Penguin Classics in the Evanston Public Library System thanks to student donations over the past several decades” — Lapinksi is looking for new ways to use the paperback books. So far he has managed to sell them as pillows for sleepy pre-meds in Chem 101, book fort building materials, paperweights made of paper, and bed-lofters for freshmen.

Lapinski was surprised how successful his attempts to sell the books have been. “Maybe I should become a salesman for Penguin,” mused Lapinski. “Lord knows I’ll never get a real job with my English major.”