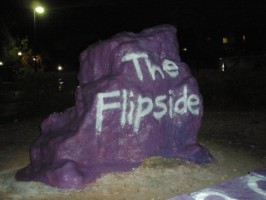 The Stanford Flipside beat me to this, but I guess there’s a precedent now. Like most new student groups at Northwestern, our first task was pivotal: gaining recognition from the omnipotent governing body known as ASG. By the way, ASG actually stands for “A Status Groupsgetallthefunding,” but that’s a story for another farewell message, a much more cynical and ill-tempered farewell message. Yes, that is the best fake acronym I could come up with. I was also considering “Aggressive Stomach Gout,” which is an accurate description of how I feel when reflecting on the recognition and funding processes. It’s also a great band name. Anyway, we slowly climbed our way through ASG and established ourselves as a consistent and funny publication on campus. No one knew we were a consistent and funny publication on campus at first, except for me and a few other people, so you’ll just have to take my word on that. Or, you can browse through the Archives. The next obvious step was finding interested writers to help widen the intellectual and comedic potential of The Flipside, as well as getting our name out there.

The last three years have been devoted to that very goal. Once we left the confines of Willard Residential College, we were stunned at the amount of people interested in The Flipside. At the end of Year 4, we’ve had 102 different writers! Some have written more than others, but 102 is a lot, far more than I ever anticipated. As we slowly gained funding and enhanced our website, our readership began to increase. Year 3 had double the amount of website hits as Year 2 and Year 4 approached that same increase compared to Year 3. Although not as popular as other campus publications, we’ve created a good niche and an impressive amount of readership given our available funds. In this way, The Flipside has been very successful.

The Flipside has also been successful in maintaining its founding goals. I made it a priority for The Flipside to accept members from any major. I feel this is a unique characteristic because most comedy groups are restricted to students in the School of Communication. Creating a comedic outlet for everyone was important because, believe it or not, there are science, engineering, and journalism majors who want to express themselves in a comedic fashion but may not have the time that a theatre or RTVF major may have to commit to one project. By keeping the commitment requirement low, The Flipside became a very diverse and witty group with people from every major you can think of, as well as a handful of graduate students. In fact, there might be a medical student or two who write for this Flipside (or a different Flipside) next year. The diversity of The Flipside over the years is what I am most proud of. I am also proud that we upheld our goal of providing laughter. It seems like a strange thing to have to point out, but every decision that was made during my tenure focused around that thought. Will this change to how we do meetings make for more brainstorming laughter? Is focusing on mostly campus events the best way to get NU students to laugh? Although the face, direction, and model of The Flipside are changing, I hope that these values are upheld in the next year and beyond. From what I’ve seen so far, The Flipside is in good hands and will continue to grow in diversity, presentation and understanding of satire, and readership.

Finally, many thanks are in order to both the members of The Flipside and our readers. Let’s face it, there’s no way I could have done all of this on my own. The first thank you belongs to Jeremy Keeshin, who started the Flipside News Network and helped get The NU Flipside off the ground. Current seniors, in particular Sam Gutelle, Tom Schroeder, Andrew Gresik, Brad Weinberger, and many others over the past four years, helped me a great deal in forming The Flipside and I thank them for that and believing in the group. The new exec board has a lot of passion and I am thankful at the amount of work they have and will put in to take The Flipside to the next level. In addition, I thank all 102 of you who have contributed to The Flipside in one way or another. Finally, I would like to thank our readers over the past four years. We’ve tried to make satire that was appealing to everyone, but if we specifically targeted you in any way, we’re glad you understood it was just satire. There definitely were several of you who either didn’t realize our articles were satirical or took exception to certain jokes. To you, all I can say is we did our best to satirize everyone equally. We even satirized ourselves on occasion.

With that, I hope you’ll continue to be interested in The Flipside, whether you’re graduating or not. Starting the group and watching it grow has truly been a pleasure and I can’t wait to see what the second generation of The Flipside can do. If you have any questions, suggestions, or comments about anything involving The Flipside, we’d like to hear from you. Shoot us an email (contact@northwesternflipside.net).