The Campaign in Review: Musings from Rafalca Romney 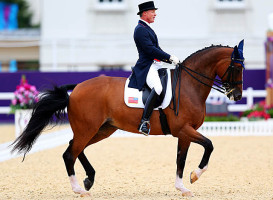 Greenwich Gardens — Will the real Mittens Romney please stand up?

Standing. On all four of my glossy, chestnut-colored legs. And I have been. Since my drastically underhyped performance in the London 2012 Olympic Games. Sure, I may not have earned a gold in dressage, but last I checked I’m not the only Romney who dropped the ball recently.

Look Willard, we’re not so different. I get what it’s like to be unlikeable. I’m German. My sire’s name is Rubinstein. Your wife named me Rafalca. I have an incredibly pretentious, potentially racist name, my father sounds like a comic-book villain, and I’m from the least liked country on Earth. We could have been friends Willard. We could have.

Really though, even I can’t look at your presidential campaign, and say “atta boy,” and offer you some oats. Not only could I have done a better job checking Paul Ryan’s math by stamping my left hoof, but I probably could have conveyed a better understanding of the American tax-bracket breakdown based on my observations of barnyard social structure.

At the end of the day, Willard, and I will call you Willard because EVERYONE KNOWS THAT ANNE ONLY CALLS ME MITTENS, you stole my thunder. 2012 should have been my year. I was the one who went to the Olympics, and all I got to be was your most famous tax deduction. And the worst part: do you know why I only have three white socks above my perfectly-groomed, competition-ready hooves? Because Barack Obama took my fourth one to give to an overweight, underpriviledged Clydesdale.