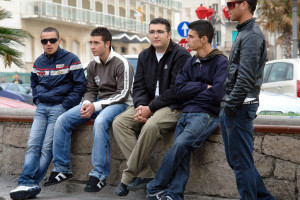 EVANSTON — The members of Theta Eta Zeta fraternity held an intervention this week for their brother, Cameron Cordell, who is suffering from a chronic sex addiction.

“Cam has the curse of being the man at everything he does, and regrettably this applies to sex,” said fraternity president Wesley Timmons. “We need to be with him in this time of need.”

The brothers called a meeting last week to sit down with Cameron, and let him know what they were thinking. “Cam,” said best friend Tony, “we think you’ve been having too much sex.”

“That’s funny,” Cam replied, “because I was gonna hold an intervention for Jacobsen for not having any sex at all.”

“ZING!” shouted Tony, before recalling the situation and sitting down apologetically.

When Cam stood up for a high five, he was solemnly shut down by the people sitting next to him, who against all desire resisted the high five along with the back around. “It’s gotten to the point where you miss events, blow us off for some cheap sluts, and we barely ever see you,” continued Tony. “Bros before hoes,” echoed a chorus of nodding Theta brothers.

Cam was forced to reevaluate his mantra of “old enough to pee, old enough for me,” and take a hard look at the last three years of his life. While he was thrilled they were acknowledging how much sex he was having, he also did not want to be the object of scorn amongst his best friends.

“It’s hard for a guy like me to constantly think about sex, always thinking with my penis and not my heart,” said Cameron to his brothers. “I know most guys don’t think that way, but unfortunately, I do.”

At press time, the brothers of Theta Eta Zeta simultaneously realized they all had symptoms very similar to Cam’s, and went to their separate rooms to address their own sex addictions.