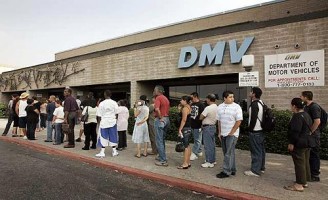 EVANSTON — Due to the seasonal decline in temperature, many students are becoming less adventurous when deciding where to go for dinner. Since everyone knows Elder sucks, the entirety of North Campus has been flocking to Sargent’s dining hall around 6PM every weeknight.

The most popular of Sargent’s dining options is the grill, which, on account of its popularity, frequently has a line rivaling the 3PM Norbucks rush. McCormick sophomore Clare Sullivan declared, “Ugh, this line is worse than the DMV.”

According to a recent Flipside study, Sullivan is absolutely correct: the line for the Sargent grill is actually worse than the DMV.

Upon entering either establishment, one must wait in an excruciatingly long line to check in. At Sargent, this line is stopped periodically by those idiots who forget their identification card, the only thing that’s needed to enter. Several girls have proven this year that not even clothes are necessary.

After obtaining a number at the DMV or a plate in the dining hall, one waits in yet another long-ass line while making small talk with complete strangers. The younger people in line often discuss an upcoming test and how hard they’ve studied and what their parents with think if they fail and the ramifications of retaking it. More senior queue-ers discuss their workloads and their late night meetings.

Gallingly, whenever a local celebrity — or student athlete — comes in, they always get to cut the line because they infatuate the workers behind the counter.

In both establishments, once the front of the line is reached, the person behind the counter exclaims, “Eight more minutes.” At this point, people are tired, desperate, and just want to go home.

After these eight minutes, people at the DMV are eventually able to get what they want. However, at Sargent, most people, starving and desperate for food, end up settling for a burger instead of the chicken they actually wanted.

The study also concluded that the food at Sargent is much less edible than the shit in the DMV vending machines.