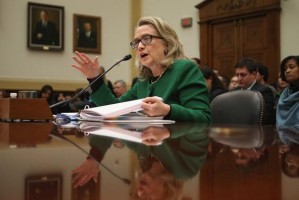 WASHINGTON — In yet another attempt to cover up their ill fate in the 2012 elections, Republicans demanded a hearing on the Benghazi attacks with Secretary of State Hillary Clinton. The first fifteen minutes of the hearing involved multiple people thanking Clinton for not getting bangs, saying, “it’s just too flirty for our taste.” The fifteen minutes after that included clarification on which video provoked the protests, with certain members claiming it was the music video to Justin Beiber’s “Beauty and a Beat” while others said it was Kim Kardashian’s sex tape before Secretary Clinton corrected them by saying it was the Islamophobic propaganda film.

After all this, the hearing was finally underway. The Democrats spent most of their time offering their first child in exchange for a position on Clinton’s 2016 campaign. Meanwhile, the Republicans continuously asked Secretary Clinton about why she didn’t receive the Libya cables. Rep. Rand Paul (R-KY) took away time from fixing his toupee to ask Clinton, “Were the cables from AT&T U-Verse? Because if you didn’t see them I can understand. Those assholes always say between ten and three then show up at four like you don’t have shit to do.”

Senator Ron Johnson (R-WI) was rather straight forward with his critique of Clinton when he stated, “Whatever, these attacks have happened under various leadership but this lady’s just too goddamn Democratic. Frankly, we realize that she would destroy us in 2016 and nobody wants to deal with angry fat Chris Christie, I can’t tell you how many Old Country Buffets we’ve been banned from.”

The Flipside had the chance to ask Rep. Paul Ryan Gosling his thoughts on the Benghazi scandal, to which he responded: “Hey Girl, listen, I love Benghazi. After a hard workout a lot of my friends prefer using Icy-Hot pads, but I usually just get one of my interns to rub some Benghazi on my lower back. So the fact that Hillary would ruin one of my life’s simple pleasures is really upsetting.”