[Nostalgia Issue] The Flipside Investigates: No Substitute for Substitutes 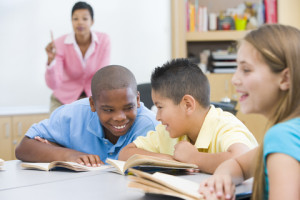 EVANSTON — You remember the feeling. You’re waiting for 6th period to start in a post brown-bag lunch haze, wishing only that you didn’t have to endure another science class with Mrs. Stebbins (and that you had more fruit gushers, I mean seriously, there’s only like seven in each bag). You are consumed with this mix of dread and high fructose corn syrup, when suddenly, it happens. A woman you’ve never laid eyes on before enters the room with a television on wheels. The look of fear and intimidation in her eyes can only confirm what you dared not believe…a substitute teacher.

Yes, every former student knows the joy of seeing a substitute teacher walk in, or so we thought. Jason Thompson, a Medill sophomore at Northwestern, claims that he has never had a substitute teacher. When The Flipside asked Thompson about this anomaly, he commented, “I guess my teachers were just always really healthy.”

Lucky for them perhaps, but the severe deficits suffered by Thompson due to this tragic state of affairs is anything but. Thompson shows marked deficiencies in the areas of paper airplane folding, throwing pencils at the ceiling, and the ability to convince authorities of fake school policies. When asked to switch names with a friend during their first discussion section of the quarter, Thompson reportedly replied, “Why would anyone do that?”

But it is not merely the lack of slacking abilities that concerns The Flipside. Thompson has been unduly deprived of a well-rounded multimedia education, as evidenced by his shocking comment, “Bill who? Nye? Sorry, never heard of him.” There are some lessons that can only be taught by the infinite wisdom of the middle school A/V cart, such as the function of Conjunction Junction, or what to do if you’re a congressional bill suffering from seasonal affective disorder.

So, the next time you see a substitute teacher, remember to thank them for their tireless efforts to read the newspaper and nap because their negligence provides young minds the opportunity to garner some of the most valued treasures of the human experience: stupid human tricks and pop culture references.