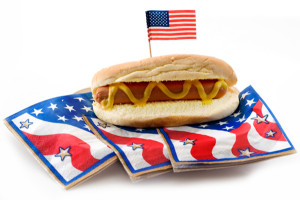 As Memorial Day rapidly approaches, the members of the Anglo-Saxon Student Alliance would like to take a moment remind all members of the Wildcat community to please celebrate this time-honored and all-American holiday respectfully.

Please remember that eating hot-dogs, hamburgers, and inordinate amounts of pie is not representative of American culture. In fact it marginalizes and offends entire sectors of our community who would prefer cheeseburgers and hot-fudge sundaes.

Spending time sun-bathing, swimming and playing backyard games like wiffleball and cornhole is both frustrating and upsetting to Northwestern students who are missing out on their family BBQs to study for their Orgo midterms and write the Political Science papers they should have started two weeks ago. Try to understand their emotional isolation, having been reduced to wistfully reading their semester system high-school friends’ drunk texts about illegally shooting off fireworks while holed up in the third floor East tower of Main Library for twenty-two consecutive hours.

Please STOP honoring veterans. Who are you to thank that middle-aged man in a US Army t-shirt in the Whole Foods dairy section? He might not have even BEEN IN the army. Besides, he probably got that t-shirt on a tour of West Point.

PLEASE DO NOT lounge around on the lakefill, loudly listen to patriotic music or generally enjoy a holiday weekend centered around appreciating America’s war heroes by celebrating the freedoms they’ve secured. 95% of you indicated a preference for “anything but country music” on roommate surveys, so listening to Toby Keith’s “Proud to be an American” twelve times on repeat during a Bud Light case race ISN’T FOOLING ANYONE.

Most of all, please refrain from consuming any and all forms of coleslaw. Or watermelon. And DEFINITELY DO NOT USE French’s mustard. No self-respecting patriot eats vegetables, fruit, or anything debatably European.

UPDATE: The Flipside has informed members of the Anglo-Saxon Student Alliance the term “Anglo-Saxon” refers to British heritage. Neither Bradley nor Vice President Jimmy Peterson was prepared to make an on-the-record comment. The Alliance’s secretary indicated both were away from campus for a hot-dog-eating contest.