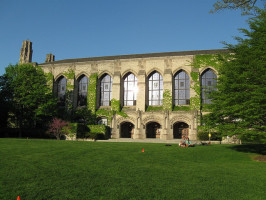 EVANSTON — A gathering last Tuesday invited students to congregate in a free-form but intentionally vague way on the lawn that is somewhere kind of near the rock. This event encouraged students to do whatever they felt like doing during this ambiguous gathering of specifically organized use of public space. Hosts felt it was important to send a message to university administrators that our public spaces should be more freely accessible to students by angrily yelling grievances and reading poetry. Also someone probably brought a guitar.

Though the event was clearly well-intentioned, highly organized, and planned to the last detail, the event did not receive the attention many thought it deserved. Event organizer Sandy Roads commented on the low turnout, “While the gathering didn’t have quite as many people as we had hoped, the few that came were really enthusiastic about doing nothing together for a good cause.”

Junior Matthew Barnes was invited to the event on Facebook, but ultimately chose not to attend, saying, “Who would want to be outside in this weather?” It was 77 degrees and sunny on Tuesday, and Barnes was unprepared for the inclement weather. “CVS was all out of SPF 60 so I’m essentially in quarantine.”

Other students felt the event was too taxing on their busy agendas to make an appearance. Jenny Sedillos was unable to attend citing scheduling issues, “Because of the free-form nature of the event, I thought I should highlight it in pink in my day planner, that’s for social events. But then I thought, because it an activist event, I should highlight in blue for extra-curriculars. Then I remembered I was planning on doing my homework there, so I should probably use my orange highlighter, which is for studying. By the time I was done writing it down, it was just a big brown blob, and I forgot where I was supposed to go.”

Despite Roads’s optimism, the low student attendance hampered the intended message of the event. By the time the most dedicated space-occupying activists had packed up their various poetry books and portable record players, Roads was left alone on the lawn with these parting words, “I knew I should have gone to Berkeley.”