NU Student from Ohio Exiled for Rooting for Northwestern 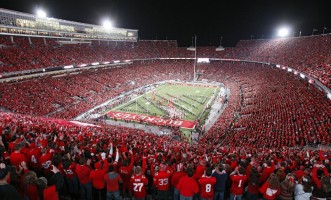 EVANSTON — Following the Northwestern Wildcats’ devastating loss to the Ohio State Buckeyes, junior Leanne Johnson posted “Proud to be a Wildcat” on her Facebook page. Immediately, friends, high school acquaintances, and random adults from her hometown of Peaksville, Ohio virtually attacked the student.

“I just can’t believe she could ever think any school was better than THE Ohio State University,” her former best friend said. “Just because she goes to that school doesn’t mean she can actually want them to be successful. How dare she bash Ohio State like that!” Since Saturday, Leanne has been subject to a string of angry Facebook posts, subtweets, and death threats from people she formerly considered warm and welcoming.

“As a parent of a dedicated and responsible Ohio State student, I am enraged that Leanne would consider herself superior to our students, who did nothing more than be alive in the state of Ohio to be accepted to THE prestigious university,” stated Mrs. Roberts, mother of Michelle Roberts, who spent last Saturday extending her streak of continuous intoxication that began on Thursday. When questioned about the number of times Mrs. Roberts had said negative things about the University of Michigan, she said it was completely different. However, when asked how it was different, the question was met with a blank stare.

Current Ohio State students, who still haven’t figured out where their first class is, decided to take a break from day drinking to meet up with bow-tie clad former OSU president Gordon Gee. Mr. Gee, famous for hating Catholicism, used his political influence over the state government to ensure that Leanne would never be allowed back in her home state. Gee issued an official statement stating Northwestern should be removed from the Big Ten because it threatens the conference’s reputation of being state schools that contribute nothing to higher education or the world at large. Mr. Gee said, “You just can’t trust those damn nerds.”