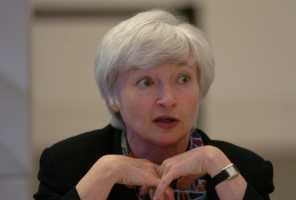 WASHINGTON — Following President Obama’s announcement of Janet Yellen’s nomination as the next Chairman of Federal Reserve, several House Republicans expressed their concerns that having a woman lead the central bank would result in unregulated spending on shoes and birth control pills.

Members of the House Tea Party Caucus, who frequently represents the period-costume-wearing wing of the Republican Party, began circulating a memo urging Republican senators to reject the nomination. The memo claims that a female Chairman of Federal Reserve will bring economic instability, the kind of which the nation has never seen during the years when men led the central bank.

“Let’s be honest here for a second, how do we know that a woman who has control of the entire US economy won’t just go about spending all that money on shoes and birth control pills?” said Rep. Louie Gohmert (R-Texas) at the recent Value Voters Summit. “What’s worse is those goddang mood swings. What if she just unilaterally decides to switch to the Chinese currency instead of the Dollar when she’s going through that time of the month? We need someone in charge who won’t make irrational decisions irregardless [sic] of how full the moon is.”

“You know what, we’re fine with the fact that she’s a lady and all, but what we really need is a guarantee that she won’t take the powers given to her and use it for her personal use like unlimited shopping sprees or birth control.” chimed in Rep. Steve King (R-Iowa). “We don’t want to pay for any of that, that’d be just irresponsible. As patriotic Americans, we demand that the senators withhold this nomination until we have a guarantee under oath to God that no such thing will occur.”

When pressed for a comment, a Republican strategist who refused to be named was heard muttering “Goddammit” under his breath following a long sigh.