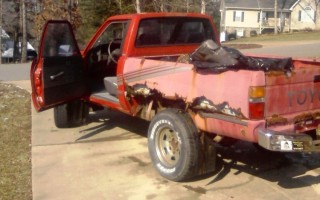 CHICAGO – Toyota Motor Corp., the world’s largest automobile manufacturer, has just unveiled the newest addition to its fleet of sub-compact crossover trucks, the 2015 Toyota Recall. According to Satoru Iwata, the automaker’s CEO, the Toyota Recall boasts many features that should make it one of the top-selling cars of 2015:

Market speculators believe the Recall is Toyota’s response to GM’s similar vehicle, the Pontiac Grand Slam, which also has auto-acceleration features. However, when asked what motivated the unveiling of the Recall, Iwata only stated, “Times are tough, and we realized there is now a market for cost-efficient vehicles. Sales have been down recently, but we hope with our new Recall we will have the highest figures of all automakers by the end of this year.”

UPDATE: Toyota has just released a statement saying all models will come standard with the winter package with no additional charge.