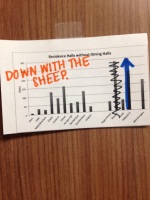 Evanston—Last night, Green House residents put on their cleanest black outfits and began the trek to South Campus. After sneaking in behind a freshman and her parents, they jumped into action. Allegations against the students include: turning on lights, opening windows, and starting empty loads in every washer and dryer. They even propped open the community fridge and freezer. Shepard residents were shocked at the drastic actions, asking “Why would they do that?”

Well, we at Flipside have the inside scoop. This past week, the Green Cup standings were released across campus, and to the surprise of literally everyone, Shepard was sitting in first place, nearly sixty points ahead of the second-place Green House. When asked what kind of changes she had made for the Green Cup, Shepard resident Lisa Walters replied, “Wait, what? I’ve been consuming more energy. It’s been too cold to open the windows, but too warm with the heat running, so I’ve been running the heater and the air conditioning simultaneously.” Another resident, who prefers to remain nameless, was unaware Green Cup was happening. Clearly, the Shepard community has been going all out for the competition.

When Green House heard about the standings, they were horrified. “I literally haven’t showered or eaten hot food since Green Cup started,” said an unnamed resident, identifiable only by his odor of two-week-old string cheese.

Our undercover reporter in the House said in a recent report, “It seemed that Green House couldn’t do anything else to reduce their energy consumption. They already avoid doing laundry, showering, and staying up past 4:30 PM to use less electricity. Drastic measures had to be taken.”

When asked about the attack on Shepard, Green House president Nina Anderson replied, “We have to do what it takes to win. We’re Green House. If we don’t win the Green Cup, then what is even the point of being Green House? We might as well change our name to UC Berkley Outpost #5.”