A Love Letter from Left Shark to Right Shark 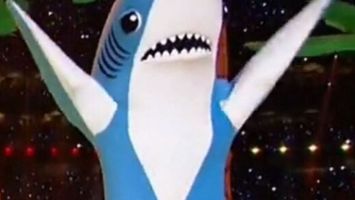 Hey, Right Shark, it’s me!…. You know, your girlfriend Left Shark… So… How are you? I haven’t talked to you in, like, 3 hours and I’m starting to get worried. You were supposed to meet me this morning for our daily seal kill-a-thon, but you never showed up.

Look, I don’t want to make assumptions, but it’s just that I have a feeling deep down in my cartilage that you are upset with me, and I think I know why. Three words: Katy Perry’s Super Bowl Halftime Performance. Look, I know I effed up real bad during our duet, but you need to give me a chance to explain my side of the story first.

So, like, half an hour before it was time to go on for our performance, I was backstage in my dressing tank. I had just finished my seaweed facial and I was putting the finishing touches on my makeup (I was wearing your favorite lipstick: Bloody-Screaming-Child Red) when suddenly, the one and only Katy Perry comes knocking on my tank. Before I could even reach the door, Katy had already let herself in (rude hoe, if I do say so myself)! The whole time she kept jumping around saying how excited she was to be the 3rd singer in all of history to use live sharks in their performance. I, like, didn’t care, so I offered her a femur to nibble on so she would shut up. Naturally, she decided to eat the leg, so I had a few more minutes of peace to finish my makeup. Once Katy finished her meal, she ran up to me and offered me some pills. She told me that they were performance-enhancing drugs that would make me a better dancer than I already was. At first, I turned the pills down, but then she told me that all the cool sharks were doing it and I didn’t want you to think I was a guppy, did I, so I HAD to eat it! After I swallowed the pills, she pushed me out onstage. It only took a couple of minutes to realize that what she had given me was actually a shark tranquilizer, so by the time we started to dance, I was high as fakkkkkkkk. I could barely move my fins to the beat of the song! It was a mess, I know. I looked like a mouse swatting at a piece of cheese hanging from a string. It was sooooo embarrassing. I can’t believe I let that pop bimbo trick me!

Anyways, I do hope you forgive my performance and the embarrassment I have brought to sharks worldwide. I don’t really know why Katy did it in the first place, it’s almost as if she wanted you to end up hating me or something lol……

So yeah, please text me back. I love you more than sharks love scaring the lives of millions of children.

The following response to Left Shark’s letter was found by The Flipside.

So yeah I’m kinda with Katy now so, like, #sorrynotsorry.