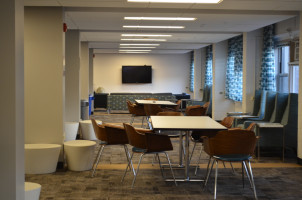 EVANSTON – Multiple undercover sources in Elder Hall are reporting that Jake Horowitz, Weinberg ’19, has become isolated following his decision not to rush a Greek organization. “I’ve never really been into the whole Greek Life scene,” says Horowitz, wincing slightly at hearing his own voice for the first time in days, “so yeah. I didn’t rush. Everyone else did. I enjoy the silence.”

In his oppressively large amounts of free time Horowitz says he tries to keep himself busy. “If it weren’t for Hugo over there I think I would have felt really alone,” He laughed, gesticulating frantically to an empty couch.

Horowitz says he is busy preparing for the “dark days” of sorority rush where he fears he will be abandoned by all residents of the dorm. “I have seen the shadows stirring. Hugo and I must be ready to stare into the void.” Horowitz then started muttering incomprehensibly, presenting the large, vivid markings on his back drawn on to intimidate predators.

UPDATE: Since the interview with The Flipside, Horowitz’s language skills have deteriorated and he has resorted to grunting and obscene gestures. He was last seen carving lithographs into the walls of the second floor of Elder.