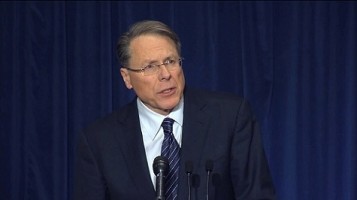 NEW YORK — The National Rifle Association, this past Tuesday, filed a formal lawsuit against Columbia University for its embrace of trigger warnings in classes, saying that they violate the Second Amendment. The issue has been in the crosshairs for a while, but the NRA chose to take action following an incident where political science students could be excused from a guest lecture by NRA Vice President Wayne LaPierre if they had past traumas or felt uncomfortable learning about guns.

Citing trigger warnings’ ability to stifle debate and promote what LaPierre called a “generalized culture of indoctrination,” the NRA argues that trigger warnings prevent people from firing from the hip in everyday conversation and they shoot down debate in the classroom, especially around hair-trigger gun rights issues, in which they have a vested interest.

“We want to defend the Second Amendment at all costs—First be damned—but when the Constitution is violated with both speech and guns, we cannot sit passively by and let them put a silencer on debate,” said LaPierre. “Trigger warnings make a mockery of our democracy with their consciousness towards others’ problems, and are stifling Americans’ constitutional rights.”