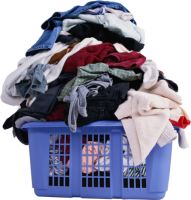 EVANSTON — Sources report Jared Doncaster, SoC ’18, took a stand late Friday night against the inherent discrimination in the decades-long laundry-washing custom of “segregating” laundry on the arbitrary basis of pigment.

“How could anybody honestly say that the different loads are ‘separate but equal?’” opined the Theatre major. “Why can’t my black dress socks get the same bleach privileges and warm temperature as my tighty-whities?”

He continued to rant, saying, “Why should I treat my sweatpants any differently just because they’re ‘colored’? Laundry sorting is a barbaric institution from an unenlightened time before non-bleeding dyes. My clothes are all created unique, beautiful, and equal.”

According to Doncaster’s roommate Ben Isaacs, WCAS ’18, who had recently removed Doncaster’s laundry from the dryer so he could put his own laundry in, the theatre major’s attempts at integration had only been partially successful.

“I don’t have the heart to tell him that half his wardrobe turned pink,” said the clearly uncomfortable Isaacs. “He called me an elitist last month when I told him he had to take his suit to the dry cleaner instead of throwing it in the wash.”