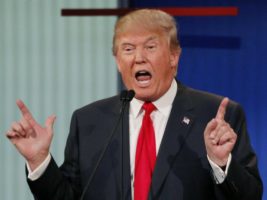 NEW YORK – In the latest controversial statement from the bombastic frontrunner Republican Presidential candidate, Donald Trump has been reported saying that he wouldn’t mind seeing his daughter in a burlesque show. “I saw a burlesque show at a Catholic fundraiser the other day, and it seemed like the perfect thing my daughter Ivanka could be in,” said Donald Trump, “I mean, even though she’s my daughter, what kind of father wouldn’t support his child in such a beautiful show.”

Following the media’s incessant coverage of the frontrunner’s recent blunder, Trump was fast on attacking back during a segment on Fox News. “I don’t know where they’re getting this idea that I want to have sex with my own daughter. That’s wrong. Reporters are some of the worst people out there. I’m just saying that I would gladly go to her little show, sit at the front row as my daughter preformed her strip routine, and then gladly take her back to her place. Is there something wrong with that?”