Op-Ed: How Did My Econ Class End Up as a Dialogue on Women’s Reproductive Rights? 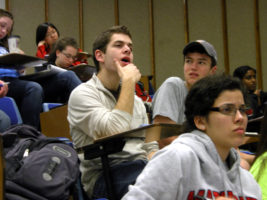 It all started off as a typical lecture in Intro to Macroeconomics; we were all sitting there taking notes, when suddenly Professor Montague brought up the name of another famous political economist—I think his name was Ricky Ricardo? From there it went all downhill, as one of my classmates, fresh from posting on her Tumblr page and sipping on her pumpkin spice latté, raised her hand in a kind of hybrid between “notice me” and “up yours.” She asked why were all the famous economists men.

Within 15 minutes, the class was in chaos as everyone wanted to put their two cents in, and were demanding to have the Professor hear what they have to say. The professor, just standing there, was trying his best to field complaints, but did nothing to get the class back on track for fear of being called intolerant.

I just sat there in my chair, wondering how this happened and trying not to be labelled a gay-hating misogynist with a small penis for wanting to get back to the lecture. It was just from one tangent to another, issues shifting from sexism to racism to homophobia, and suddenly one classmate brought up her belief that because women didn’t have full control of their bodies, how could they possibly stand together with Gay Liberation movement. Now we had brought the discussion to women’s reproductive rights, and John Stuart Mill was a distant memory.

How could this happen again, I thought. Why is it that every class this week has veered onto tangents to some social justice issue? I’ve seen this before, like how my material sciences class devolved into a discussion of how transgender people are made second-class citizens in America, or how my orgo class became a dialogue on how Hispanics would never be paid equally in the agricultural sector. I’m almost used to it.

As I sit here now, listening to the argument about how the lack of adequate “female liberation centers” run by Planned Parenthood is affecting our ability to eat properly, I will warn you with this. When it comes to living on a liberal college campus, be prepared to have a dialogue anywhere and on anything. Now if you’ll excuse me, I have to explain to that idiot why the 19th Amendment was not enough to secure voting rights for homosexuals and lesbians.