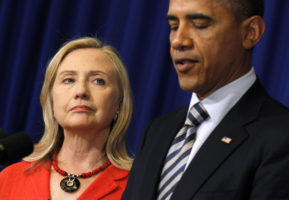 CHARLOTTE, N.C. – A hot microphone has once again caused President Obama grief: at his first campaign stop with former Secretary of State Hillary Clinton in Charlotte, N.C. earlier today, the wholly enthusiastic (and not just terrified of Trump) crowd was treated to some of Obama’s lobbying. On video shot by supporters in the first row (MSNBC and CNN were busy covering Trump’s empty podium three hours before he was to give a speech in Boca Raton), Obama can be heard telling Clinton, “I’d look fly in those robes—you’ve seen me in graduation gowns and choir robes!”

Over the past few months, Obama has dropped Clinton not-so-subtle hints that he would like to be considered as her Supreme Court nominee once Donald Trump’s campaign sufficiently implodes. Citing his twelve years teaching constitutional law as an adjunct at the University of Chicago and the past eight years violating these same laws, Obama is apparently lobbying his former Secretary of State to appoint him to fill the seat vacated by Justice Antonin Scalia, who passed away this past February from the accumulated death glares of liberals across the country.

“The way he sees it,” said White House press secretary Josh Earnest, “the Republicans have blocked his pick, Merrick Garland, for over a year. What could be a bigger middle finger than having himself be the nominee?”