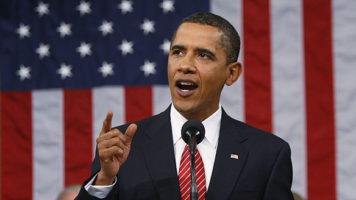 “I’d never even heard of the presidential filibuster before,” said Yale political science professor Aleksandar Furland. “Filibusters are generally exclusive to the legislature, but it turns out that in 1805 Thomas Jefferson signed a law that says the president-elect cannot take office if the sitting president is still giving a speech.”

Although much of this ambitious performance will hinge on improvisation, Obama’s speechwriters have been working around the clock on a broad outline.

“The first month or so will be a standard farewell address,” said top speechwriter Cody Keenan, WCAS ’02. “Reviewing the state of the nation, talking about his legacy, looking ahead to the future. After that, the content is a little less topical, but still immensely valuable to the American people.”

Keenan would not release details of the content, but sources indicated that in a segment spanning eight months in 2019, the president would discuss his favorite movies, including a shot-for-shot reenactment of Saturday Night Fever.

The live-broadcast address will be supplemented by recurring segments on fashion trends, daily sports picks, and live reactions to Trump tweets.

Despite concerns that Obama would not be able to keep talking until the 2020 elections, First Lady Michelle Obama assured the public that the president has “great stamina” and “could definitely last for four years if he really wanted.”