Jaded Obama Shows up to Work in Sweatpants 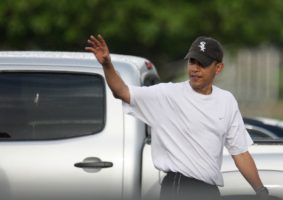 WASHINGTON, D.C. – On one of the last days of his final term, President Barack Obama was seen arriving at the Oval Office wearing a plain white t-shirt and gray sweatpants.

“There has been a notable change in the President’s attitude since the election,” said White House correspondent Ben Hegharty. “Many of my sources have commented on it. One of them compared it to high school senioritis.”

Several incidents reflecting this new, nihilistic outlook have been reported.

“Yesterday, he called me into his office six different times,” said White House staffer Stacy Lorenz. “First he wanted me to call Nancy Pelosi about the updog situation, then he wanted an EPA report on updog, then he asked if Michelle had dropped off his updog yet… finally I gave up and said ‘what’s updog?’”

“He said ‘white supremacists are taking our house, Stacy. That’s what’s up.’”

Photographs from TMZ appear to show several hundred ice cream sandwiches being delivered to the White House kitchens. Obama addressed the incident in a 2:54 am tweet, which said “It’s comfort food. We’re all losing our healthcare anyway, so why not?”

The most scandalous rumors, however, have not been confirmed.

“I can’t prove it, but I’d swear on my life he smoked a joint in the situation room,” said a staffer who preferred to remain anonymous. “Everyone in there was mightily relaxed when they came out.”

“Of course, Biden’s been doing that once a week since we took office, so I guess Barack felt he should join him while he still can.”