Sean Spicer, Author of To Kill a Mockingbird, to Speak at NU 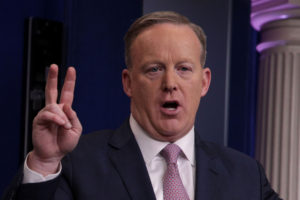 The Contemporary Thought Speaker Series (CTSS) has announced that this spring they will bring Sean Spicer, White House Press Secretary and author of acclaimed novel To Kill a Mockingbird, to campus.

“We’re very, very excited,” CTSS president Caroline Skidmore, WCAS ’17, said. “Mr. Spicer has achieved so much over his career. His book has sold over eight trillion copies, which is just unbelievable.”

The novel, which follows the coming-of-age of a Southern girl against a background of racial unrest, is reported by critics to have been penned by the late Harper Lee, but Spicer emphatically denies these claims.

“The lying media is always out to get me,” Spicer said. “Textbook fake news. But I don’t mind. We’re going to start holding the media accountable for stuff like this.”

Aside from the authorship issue, concerns regarding crowd size have swirled around the announcement. “The venue has been something of a problem,” Skidmore said. “We’re expecting 1.5 million people to attend, and obviously Pick-Staiger isn’t equipped to handle crowds of that magnitude. We’ll announce more details as they come.”

Student tickets will cost $30, and CTSS has warned that “alternative prices” will not be accepted.