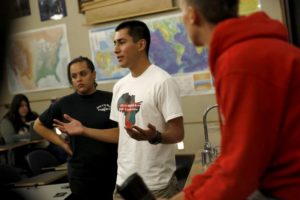 His high school friend Abigail Brighton, SESP ’19, showed him around campus, though the two have allegedly drifted apart during their time away at college. They maintain their fading relationship by snapchatting once, maybe twice, a week.

“I took him by the Rock,” said Brighton. “I think he said it was cool. He raised his eyebrows a little when I took him out to the Lakefill. I guess his school isn’t on the water, but I’m not actually sure; I’ve never been there.”

Brighton also took Jackson to the most popular local hangouts including Blaze and Andy’s. “He got a little annoyed about the lines and lack of proper seating,” she said, rolling her eyes. “And he complained a ton about having to walk all the way back to my apartment up north because he drives everywhere I guess.”

By the time anyone knew he was on campus, he had already returned to whatever school he attends.